Earlier this year I was excited and honored to be selected as a delegate to the 2016 Republican National Convention. However, due to political developments since that time, and after considerable thought, I decided not to attend. I could not in good conscience attend a coronation and celebration of Donald Trump. My statement on the subject is below along with a summary of some of the firestorm that followed. 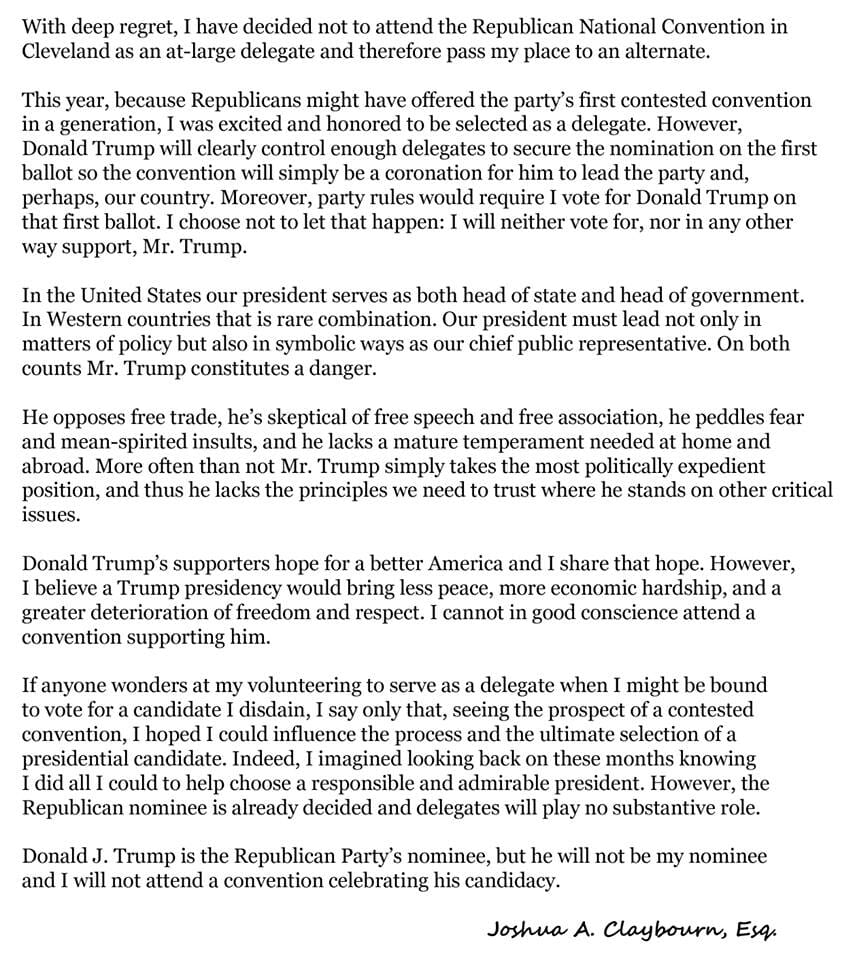 Soon after I released the statement, my position was echoed by former governor Mitt Romney, former governor Jeb Bush, former presidents George W. Bush and George H.W. Bush, and a slew of congressmen, including senators Lindsey Graham and Ben Sasse. Clearly there was a deep and growing divide within the Republican Party.

Although I was flooded with calls and emails of support, my position also naturally served as a lighting rod for some of Trump’s most passionate supporters, which have gained a well-earned reputation as some of the most belligerent in modern politics. Growing media coverage of my withdrawal fanned the discussion. The New York Times, CNN (here and here) and MSNBC both covered it, along with numerous local and regional media outlets like the Courier & Press, Indianapolis Star, Brad Byrd, and The Front Row Seat.

Some critics charged that I had a duty or responsibility to “represent the will of the voters” and attend the convention to vote for Mr. Trump. Why would they care? An alternate will go in my place who is likely to be far more supportive or compliant with Trump’s candidacy and goals. Ultimately I am not personally required to do anything so I have chosen not to serve as a delegate.

Some criticism resulted from a misconception of the process — in Indiana delegates are appointed, not elected. The prospect of a contested convention brought out a record number of applicants, including me. I believed Trump would not be the nominee at the time I applied, and if it ended up being contested I obviously hoped to take part. Although I applied to be a delegate with the seemingly small chance that he could be the nominee, at the time I applied I did not believe he would have the nomination locked up in a such a way as to make the convention a celebration of his candidacy. I want no part of that. Regardless, my views on the subject were well known prior to my nomination. This message below was posted on Facebook on March 1st, well before the application and selection process.

Finally, many suggested the photograph I had taken with Donald Trump was a contradiction that indicated I somehow supported him. I believe it’s important to meet with as many candidates as possible, even those with whom you disagree. In fact, I think it’s especially important to seek out and meet with others from different perspectives. Presumably Donald Trump agrees or he would have never taken pictures with the Clintons or any of his other opponents and enemies.

Ultimately, my decision to avoid the convention was a protest of Donald Trump’s candidacy and his attempt to redefine the character and philosophy of the Republican Party in ways I can never support. Those upset by my decision are not really concerned with hypocrisy or duty. Instead, they are upset by my criticism of their candidate and my refusal as a Republican to fall in line.

My concerns with Donald Trump are numerous, but perhaps the deepest is that his candidacy strikes at the very heart of the American idea. As Margaret Thatcher put it: “Europe was created by history. America was created by philosophy.” An important component of that philosophy is limited government, free markets, and liberty. Our president should support that philosophy with a sound temperament and honest approach which makes us proud to be Americans. On all counts Donald Trump fails the test.